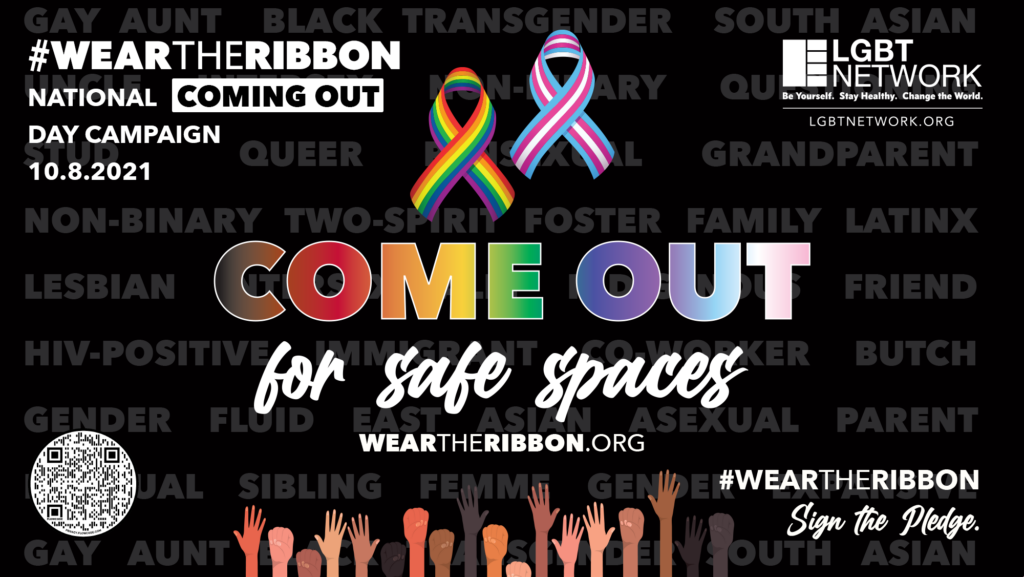 HAUPPAUGE, NY – LGBT Network announces the launch of its 20th annual National Coming Out Day (NCOD) Campaign for October 8, 2021, a one-day campaign that engages communities to take a stand against the discrimination, violence, harassment, and bullying of LGBT people.  Participants wear a rainbow or trans ribbon, pronoun sticker, or Ally sticker to show they are “coming out in support of safe spaces” where LGBT people LIVE, LEARN, WORK, PLAY, and PRAY.  LGBT Network created this Campaign in 2002, and since that time has pioneered this annual community organizing strategy to engage more than 900 institutions and nearly one million participants in 2019.  After implementing the Campaign virtually in 2020, LGBT Network is excited to have the Campaign take place in-person again!

“This Campaign empowers our communities to take action locally in their own workplaces, schools, places of worship, sports teams, organizations, and other groups to build awareness and education around the needs of LGBT people,” says LGBT Network Founder and President/CEO David Kilmnick.  The Campaign is focused on the materials in the Campaign Organizing Kit provided for FREE by LGBT Network to participating organizations.  The Kit includes posters, rainbow and trans ribbons, pronoun and Ally stickers, other materials, and an Organizing Manual to help Campaign leaders make the most of their efforts.  The Campaign is driven and implemented by LGBT and non-LGBT allies alike.

For institutions, organizations, and groups seeking to participate in the Campaign, they can request their own FREE Coming Out Campaign Kit here.

For 2021, the Campaign features two major changes that put a focus on inclusivity.  For the first time, the Campaign offers and incorporates the pink-white-blue ribbon to represent trans communities.   The other major change for this year’s Campaign is in the visual graphic created.  The 2021 poster and related images feature arms and hands depicting people of various racial and ethnic backgrounds to emphasize the intersectionality of LGBT people with respect to sexual orientation, gender identity, and race and ethnicity.  The background of the poster also includes various words that reflect identities within the LGBT community, such as “Black,” “Woman,” “Trans,” and “Parent.”  The inclusion of these words showcases the diversity of the faces and voices of the LGBT movement.

“This Campaign reminds us all of the struggles and challenges that LGBT people face – and continue to face,” says Kilmnick.  Over 85% of LGBT students report verbal harassment in school, 60% report sexual harassment, and 27% report physical harassment, leading to over 58% feeling unsafe in school. For adults, over 21% of LGBT workers had been treated unfairly by an employer, and 90% of trans workers experienced workplace harassment.  The Campaign helps participating institutions create a safe, inclusive place for LGBT individuals to feel free to be themselves, something so often denied to them in other settings.

LGBT Network also offers the opportunity for Campaign Training for participating institutions, sponsorship opportunities, and the ability for individuals to volunteer their time to help the Campaign succeed.

If you would like to get involved in the Campaign and take action today:

To learn more about the campaign, visit www.WearTheRibbon.org