Rally To Protest School Board Order To Ban Pride Flag 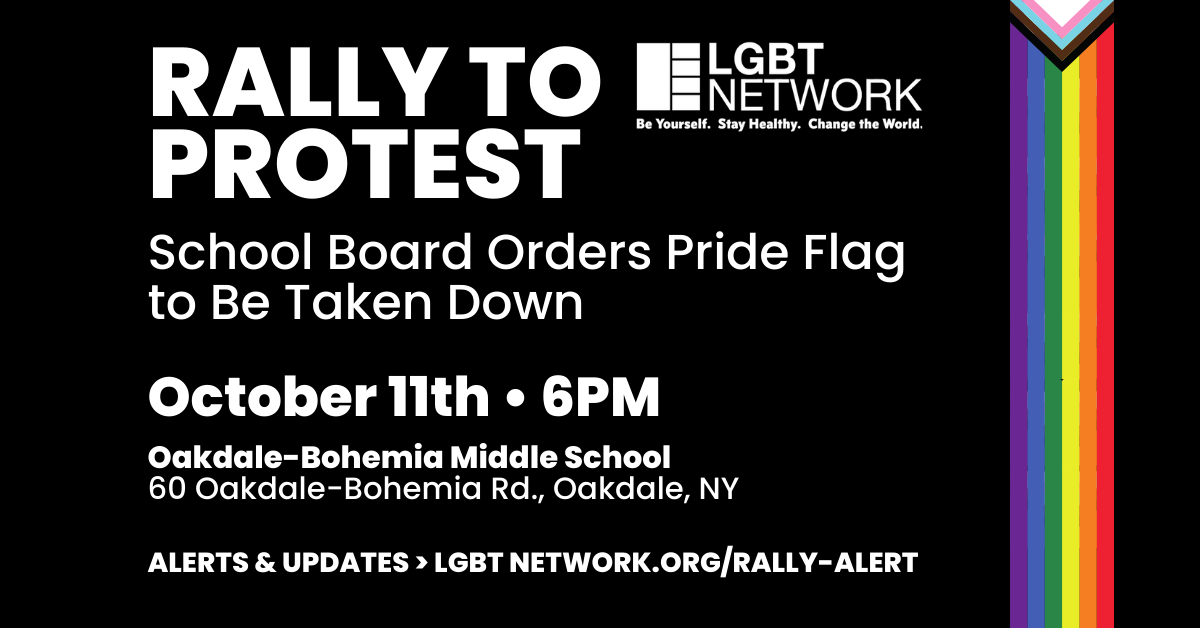 While tens of thousands will be participating with the LGBT Network’s Wear The Ribbon campaign this Tuesday October 11th on National Coming Out Day, one school district

While tens of thousands will be participating with the LGBT Network’s Wear The Ribbon campaign this Tuesday October 11th on National Coming Out Day, one school district on Long Island is doing everything in its power to create dangerous unsafe spaces and implement targeted and discriminatory actions and policies against the LGBT community…and we need your help!

The Connetquot School District has targeted The Progress and The Pride Flags to be taken down in classes where they have existed for years. The School District has threatened teachers with disciplinary action, including losing their job, if they choose to keep the symbol of pride and safety displayed. The District claims that this “activity” is expressing political views. Aside from that being completely ignorant and offensive given that being LGBT is neither an activity or political view, it is in violation of the First and Fourteenth Amendments of the United States Constitution. That is setting aside the numerous anti-discrimination laws that this practice violates as well. Simply, this bigotry is the result of the planned efforts of right-wing extreme groups to politicize our schools and target LGBT people. What’s happening in Connetquot School District is a symptom of a much larger problem and we are going to fight this with every ounce of effort and power that we have and we will win. Make no mistake this fight is going to be a marathon, not a sprint.

Over the last few weeks, we have been working very closely with the Connetquot teacher and the Connetquot Teachers Association to ensure that their rights are protected and that our students will have the safe spaces that they need. Unfortunately, despite these efforts to work with the School Board and District Administration, which we have repeatedly requested, they have instead decided to move forward to remove these symbols of identity, pride, love, and safety while leaving a parking lot with spaces painted in the Blue Lives Matter Flag and MAGA painted on the poles.

Today, the Network and the Connetquot teacher sent a cease and desist to the entire school board and administration, by our attorneys, Lieb at Law, P.C., demanding that they immediately revoke their discriminatory policy and disavow their discriminatory acts. We also demanded that they undertake immediate action to enroll in requisite trainings so that each and every one of these decision makers understands the damage that they have already caused and continue to cause by their wrongful and illegal acts.

This Tuesday October 11th on National Coming Out Day, please join the LGBT Network, the students and families of the Connetquot School District and the Connetquot Teachers Association in a rally standing up to hate and discrimination and marching into the school board meeting to demand they rescind their ill-advised and discriminatory acts and policies. We are putting every school and library district on notice – don’t mess with our kids and families and don’t mess with our teachers because there will be grave and costly consequences to face including federal and state litigation.

Join us at 6pm at Oakdale-Bohemia Middle School at 60 Oakdale-Bohemia Road in Oakdale. Signs and flags will be handed out. On National Coming Out Day, come out to demand safe spaces for LGBT people!

Sign-up here to ensure you receive the latest information about the October 11th rally including any venue changes.