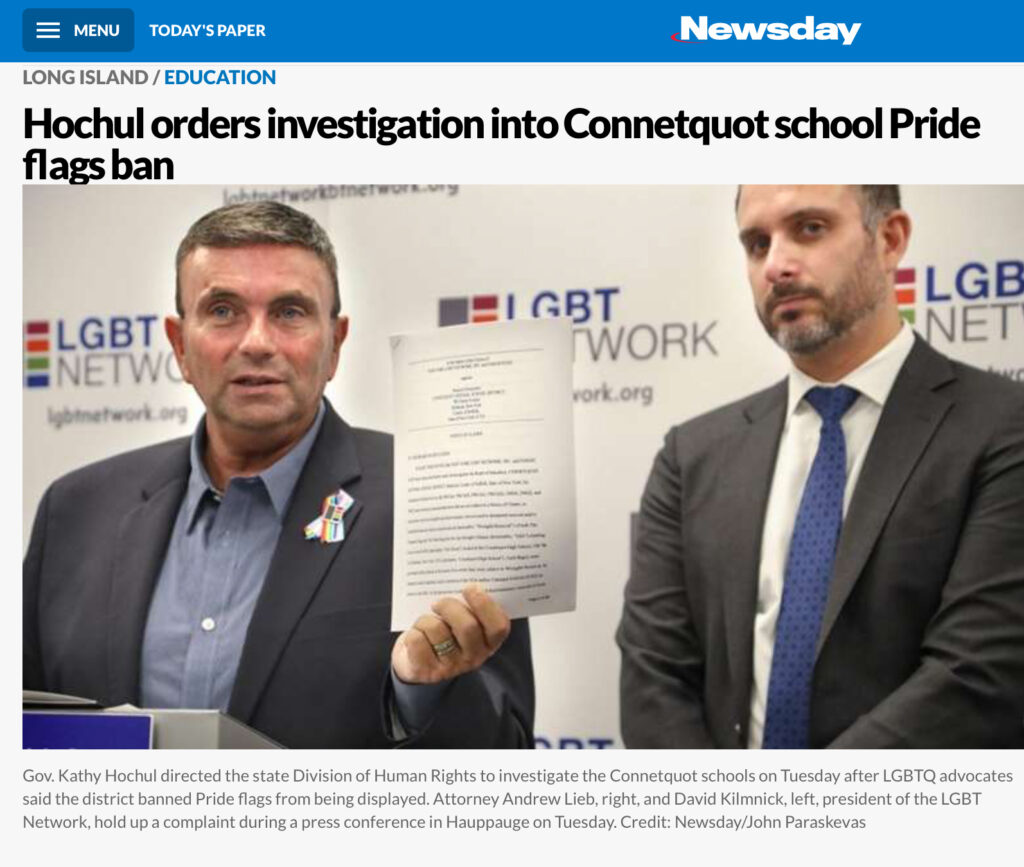 Gov. Kathy Hochul directed the state Division of Human Rights to investigate the Connetquot schools on Tuesday as more than 200 LGBTQ supporters rallied before a packed school board meeting to call for a reversal of the district’s ban on Pride flags in a high school classroom.

LGBTQ advocates alleged the district violated the state’s Dignity for All Students Act when it ordered the flags removed.

In a letter sent to Hochul and state Education Department Commissioner Betty Rosa earlier in the day, David Kilmnick, president and CEO of the LGBT Network, called on the state to investigate “Connetquot’s deliberate, intentional and discriminatory actions.”

Hochul’s office in a statement Tuesday evening said, “Governor Hochul is committed to protecting the human rights of New Yorkers, and has directed the Division of Human Rights to investigate potential violations of Human Rights Law in this matter, consistent with the agency’s mandate.”

The controversy began last month when Sarah Ecke, a math teacher at Connetquot High School, refused to take down two flags — a Rainbow flag and a Progress Pride flag — in her classroom. District officials said they acted in response to students’ complaints of “feeling uncomfortable” over the display of the Progress flag, which has more colors — including black and brown stripes — than the traditional Rainbow flag.

At the rally Tuesday night outside Oakdale-Bohemia Middle School, some were draped in Rainbow flags. Many waved Pride flag-decorated signs to approving honks from passing cars.

Helen Werner, 21, who graduated from Connetquot High School in 2021, said her fear of being bullied prevented her from coming out in high school.

“I’m trans and I’m bisexual, and I did not feel comfortable coming out in Connectquot,” Werner said at the rally.

About 30 counterprotesters waved large and small American flags nearby.

Among them was Joanne Minnieer, a founder of Patriots of Pride, holding a large American flag. She said she supports the district’s decision to remove the Progress flag, which has added colors of light blue, pink and white in triangle-shape, representing the colors on the transgender pride flag. She said that “is going too far.”

Ecke is the adviser of the school’s Gay-Straight Alliance club and her classroom is where the club members meet, advocates said.

The disagreement escalated last week when the district issued a directive banning all flags except the American and state flags in classrooms, citing a district policy that said employees should not engage in political activities in school. Curriculum-based flags will be allowed, district officials later clarified.

Ecke took down the flags Thursday after receiving a letter from high school Principal Michael Moran stating that she could face disciplinary action for failing to comply with the directive, said Kilmnick.

“That is discrimination. That is a violation of the Dignity for All Students Act of New York,” Kilmnick said at a news conference Tuesday.

The state law seeks to provide public school students with “a safe and supportive environment free from discrimination, intimidation, taunting, harassment, and bullying” on school property, according to the dignity act.

Connetquot schools Superintendent Lynda G. Adams said in previous statements that the teacher was asked to remove the Progress flag but keep the traditional Rainbow flag on the wall, a “compromise” she said the teacher rejected, as was an offer from the district of a sign that says “This is a safe space to be who you are.”

“Unfortunately, with this continued refusal, the district must now fully implement Policy 1310 which states that school employees shall not engage in political activities on school premises,” she wrote last week.

“ By adhering to the letter of the Policy, we can neutralize the environment, hopefully making the space feel safe and comfortable for all of our students.”

At the rally against the Connetquot policy, Charles Mauceri, who has two sons in Connectquot high school, called the flag ban wrong.

“I think it’s wrong because I don’t feel like it’s a political symbol,” said Mauceri, holding a sign that said “Dads Against Pride Flag Bans.” “The flag has an accepting tone to it, but it’s not political. I think accepting people is not political.” 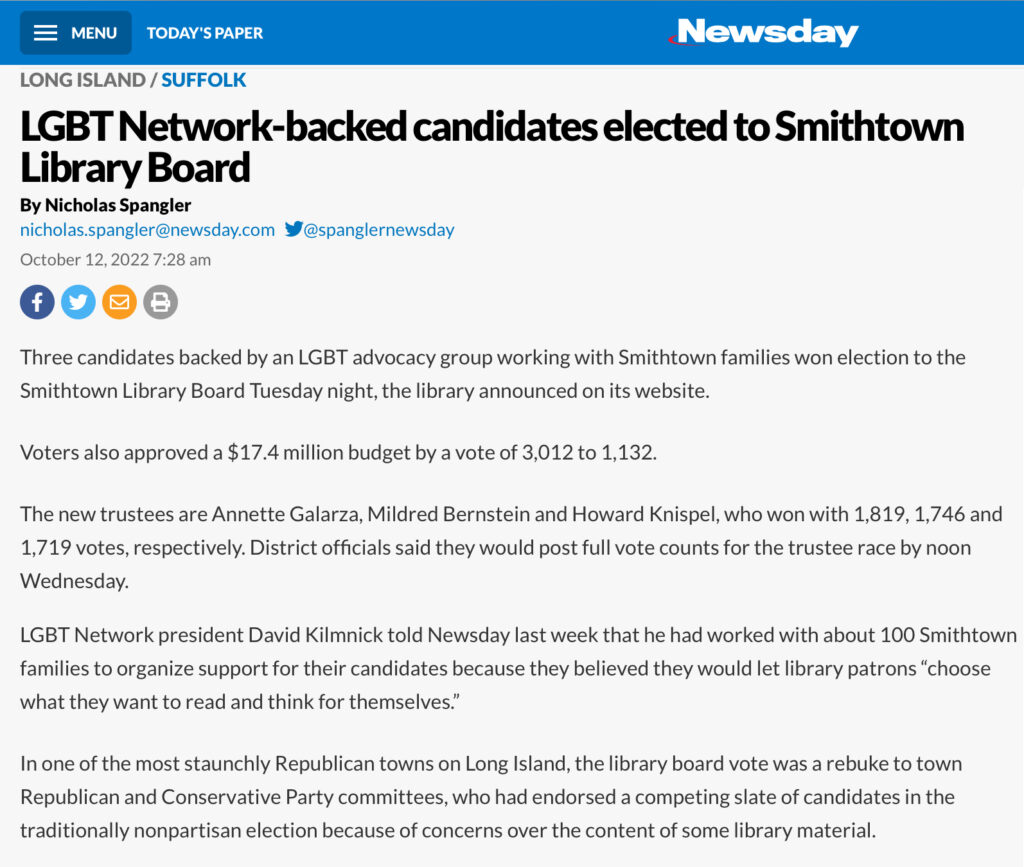 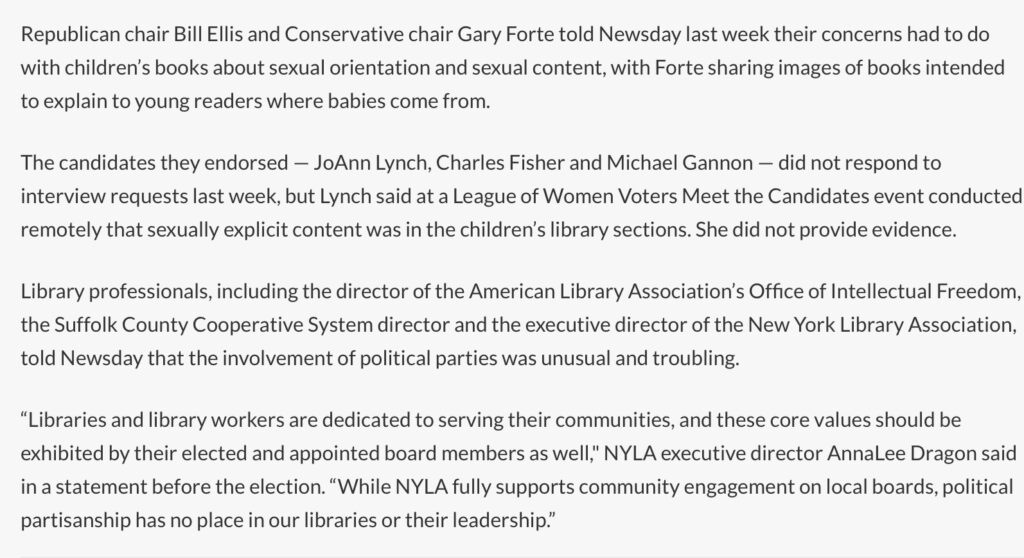